The Birth of the Refrigerator: Where Do They Come From?

The birth of refrigeration does not begin with the modern refrigerator. In fact, the appliance we use in our homes and businesses to keep things cold and frozen didn’t become a global household staple until around 100 years ago. Before the dawn of the fridge age, society had various natural and manufacturing methods to make, source, and store ice for daily use.

That’s what we’re going to talk about today. In this blog, discover how people kept the essentials cool before the refrigerator, what consumers adopted before it, and the brilliant engineering behind the modern mechanisms responsible for safe cold storage.

In ancient times, people in China, India, and Rome gathered ice high atop mountains and beneath shallow desert basins. But the ice wasn’t primarily used for storage or preservation—the rich and powerful consumed ice as a treat. Thousands of years ago, ice was a social identity on par with gold. Though our ancient ancestors consumed ice similarly to how we do today, they did not have the proper technology and designs to transport and store ice.

That is, until the Persians.

Around 400 BCE, the Persian Empire began constructing yakhchāl, an ancient above-ground ice house capable of storing ice for years. Some remain standing today! This is the first example of humans developing ways to store cold, refreshing ice. Fun fact: present-day Iranians refer to modern refrigerators as yakhchāl. If you want to learn more, read about yakhchāl by visiting the history of refrigeration’s blog.

How did ancient people transport large quantities of ice without access to modern refrigeration technology? Well, there’s a cool answer to that.

For us in the MidSouth, heavy snow is rare. In parts of the US that experience annual snowfall, locals loathe mountains of crusty, gray ice in parking lots. These mountains last for weeks, if not months. That’s an odd phenomenon, isn’t it? Shouldn’t ice melt quickly?

Here’s the science behind it: the ice stacks on top of each other! Less surface area exposed to air means the thermal insulation effect of the ice compounds. This is why parking lots become winter nightmares and how our ancestors transported ice.

Eventually, ice and refrigeration fundamentally altered the way humans eat, travel, and survive. That paradigm shift didn’t begin until the 19th century, though. From ancient times to the American Revolution, ice remained a summer novelty exclusive to the wealthy.

Before we discuss the modern refrigerator’s humble beginnings, we need to understand the beginning of the ice trade.

It’s 1806. Louis and Clarke are out and about. Beethoven was composing his next big hit. Andrew Jackson killed a guy. And, last but not least, the global ice trade emerged from the primordial lakes of New England.

In the US, chilling entrepreneurs cut blocks of ice off New England ponds and sold them up and down the east coast. The Northeast corridor was perfect for the global ice trade: deep lakes, cool ponds, access to active ports and trade routes, and an ideal climate. 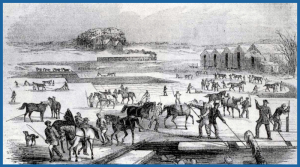 New England ice was first sold in the US South and the tropical Caribbean. Eventually, global demand exploded. Britain and India purchased all of the ice Americans could harvest! The shift from novelty treat to necessary and widely accessible commodity made water ice relatively affordable. Now, people from all walks of life could benefit from the health effects of storing food in cold temperatures. Without ice, people died left and right from food poisoning due to spoilage. Readily available ice saved lives, reduced costs, and propelled global civilization decades forward.

Before the ice trade, industrial meat production struggled to grow beyond regional and local markets. Now, cold storage and transportation shifted the meatpacking industry to Chicago. For breweries in places like the Midwest, the ice trade allowed year-round brewing. Without the ice trade, Americans couldn’t enjoy the beef n’ brew now synonymous with the stars and stripes.

So, you bought some ice blocks around the 1840s. Where do you put them? Well, generally, average consumers used natural ice blocks to preserve food in what they’d call a refrigerator. The modern American wouldn’t think of this device like a refrigerator, though. It’s more of a prototype icebox. This wooden, two-compartment kitchen contraption used air to insulate ice and keep things cool for as long as possible. Like mailmen, icemen delivered large blocks of ice door to door.

The icebox had its fair share of issues. For one, you’d have to keep the doors shut as much as possible. Leave the doors open too long and you guessed it—the ice melts! Second, iceboxes needed to be thoroughly cleaned of bacteria and scum from naturally occurring ice.

Still, people put up with it. The benefits far outweighed the annoyances. Thanks to the icebox, domestic life was a sustainable, safe endeavor. Your turn, plumbing!

By the early 1900s, demand for ice was through the roof in industrialized societies. In fact, our demand for ice exceeded the supply for natural ice. That’s pretty wild to sit and think about!  Nowadays, we rely on factory-made or manufactured ice for just about everything. Well, our recent ancestors had the same idea. Thanks to vapor compression, an invention available for decades, industrialists constructed sprawling commercial mechanical refrigeration. Artificial ice was born.

END OF PART ONE

We love our industry and customers so much that we decided to create a two-part series on the history responsible for keeping our lights on. Advancements in refrigeration technology, support from our loyal and kind customers, and a commitment to excellence are three reasons why Memphis Ice succeeds. We couldn’t do it without you.

In this blog, we covered the rise of refrigeration.

In part two, we’ll discuss the rise of ice industrialization, the dangers of early consumer refrigeration, and the chilling pioneers responsible for refrigeration as we know it today. Click here to read part two!