The Birth of The Refrigerator: How We All Ended Up With One

This blog is part two of a two-part series from Memphis Ice about the beginning’s beginning of the refrigerator we all know and love. From ancient history to modern times, discover our ancestor’s fascinating journey to safe and sustainable cold storage.

Here’s where we left off in part one:

Now that you’re all caught up, it’s time to learn how the global ice trade met its maker.

Ice famines of the late 1890s and early 1900s are one of many reasons the demand for natural ice decreased and artificial ice skyrocketed. Volatile shifts in temperature, like hot winters and cool summers, spun a generally reliable ice industry into a chaotic scramble. People didn’t have ice to preserve their food and stay cool. Riots ensued. Local hospitals attempted to distribute ice to those in need.

For decades, consumers struggled to purchase and enjoy natural ice. Industrialists, emboldened by sustainable vapor compression technology and ice famines, capitalized on a desperate market ready for a change.

In a few short years after World War I, the demand for natural ice rapidly declined. Consumers discovered artificial ice was safer to use and faster to buy than the natural ice they grew up with. The global ice trade as the world knew it was over. Still, the modern home refrigerator we know today hadn’t yet appeared.

That’s about to change.

The deadly dangers of early refrigeration

When humans get hot, they sweat. It’s how we stay cool. In effect, the same thing happens to your refrigerator. In a process known as evaporative cooling, heat energy transforms a liquid into a gas. When humans sweat, we release that gas into the air. No more heat! Refrigerators, however, capture the evaporated gas, compress it, and condense it back into a liquid to keep your food cool. That’s why the refrigerator blows hot air from its base or radiates heat from behind.

This process is known as the vapor compression cycle. It’s an essential step in reaching modern refrigeration and a big factor as to why it took the modern world nearly 100 years to optimize and adopt commercial refrigeration for the home. Why did that much time pass before consumers adopted vapor-compressed refrigeration?

Well, for one, people didn’t see the need to change from iceboxes. They did the job. Mechanical refrigeration was more expensive and did the same job as the icebox. But that’s not a very good reason to avoid innovation.

Ammonia is incredibly efficient at absorbing a large amount of heat energy. Our modern society continues to use ammonia for industrial refrigeration, despite the risks. At this point in refrigeration history, around the early 1900s or so, ammonia was the common industrial choice for vapor-compressed mechanical refrigeration. But here’s the life-threatening problem: closed systems are not fully closed. Some refrigerant leaks out. What happens when you inhale and suffer from ammonia poisoning? Well, for starters, respiratory failure.

Would you jump at the chance to replace your familiar, relatively safe cooling system in favor of a product almost guaranteed to leak toxic gas into your home?

Probably not. We’ll just stick with our iceboxes, thank you very much. At least pond scum doesn’t asphyxiate.

Mechanical refrigeration relies on an electric compressor that essentially squeezes refrigerant under high pressure. What can happen under high pressure? Explosions. As consumers understood the technology behind mechanical refrigeration, they adamantly refused to adopt it into their homes. This wasn’t about a better way to cool your food; this was asking the public to invest in the next step in civilization. Eventually, the market needed to meet the consumers in the middle, even if the consumers kick and scream a little bit over adopting modern solutions to common problems.

DOES MY REFRIGERATOR HAVE AMMONIA IN IT NOW?

Heck no! In most modern refrigerators, tetrafluoroethane is the primary cooling chemical. It’s safe for humans and the ozone layer. The same can’t be said for the first commercially viable chemical in modern refrigeration: R-22. Known by most as Freon, this gas kept our food cool and propelled Western civilization yet again. Used primarily in World War II for a variety of tasks, Freon-cooled refrigerators didn’t reach most US households until the late 1940s.

Hindsight is 20/20. We know now freon is a dangerous chemical for the environment, stripping the Earth of its radiation-absorbing ozone layer. By the 1970s, we realized our mistake. We’re still cleaning it up to this day. The United States just passed a production and importation ban on freon as recently as 2019. There’s still work to be done to build a safer, sustainable refrigeration industry for the planet.

Refrigeration is yesterday’s news. Now, it’s the Age of the Freezer. Don’t get us wrong, refrigeration is a vital part of our daily lives. The freezer, on the other hand, is borderline essential for the economy we depend on today. In other terms, the freezer did for the global economy what simple refrigeration did for the household. This is arguably the most revolutionary and disruptive change to social and economic systems since the Industrial Revolution. 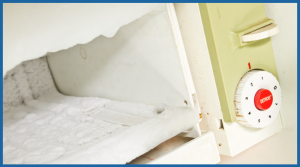 Exterior frost is a thing of the past. Interior frost? Well, that's a different story...

By the 1950s, domestic combination refrigerators and freezers hit the market and became an overnight sensation. The big problem with early refrigerators? Frost! Some mini-fridges deal with internal frost today, as do some older refrigerators. But external frost building around the seams, doors, and handles threatened to derail the entire industry. The solution? Frost-free refrigerators! Instead of consumers constantly defrosting their refrigerator, gaskets and optimized closed-loop systems kept frost at bay.

By the 1960s, the majority of American homeowners relied on refrigerators and freezers for safe and reliable cold storage. The modern era had arrived.

This is not the end of your refrigerator’s story. Refrigeration history isn’t ancient history. It’s modern history. And it’s still being written. New, emerging technologies aim to create sustainable, cost-effective means for the cold storage we depend on. From your work office to your home office, the refrigerator is the building block separating us from the hunter-gathers our species used to be just a few thousand years ago.

We can’t help but wonder, who is responsible for getting us to this point? Who are the people we need to address and thank for their positive contributions to our industry?

We can’t help but wonder, who is responsible for getting us to this point? Who are the people we need to address and thank for their positive contributions to our industry?

In 1806, Tudor and his family hatched the brilliant idea to sell natural pond ice in regional and international markets. In just a few short years, Tudor shipped his first batch of ice blocks to the Caribbean. This endeavor met its fair share of logistical and financial hardships—all small businesses do at the start. That didn’t stop Tudor’s indomitable entrepreneurial spirit. Tudor’s ice company didn’t turn a profit until almost a decade after his first shipment! His sacrifice and dedication to ravenous customer demand is the reason Tudor is known by another moniker: The Ice King.

Until his death in 1864, Tudor worked tirelessly to expand, capitalize, and optimize the global ice trade. We could sit here and argue the “what if’s” all day, but the bottom line is this: No Frederick Tudor? No Memphis Ice.

So thanks, Fred. Our hats are off to ya!

Where we see trees, Tudor saw an opportunity. The Ice trade was born.

The Father of the Refrigerator. An American physician, Dr. Gorrie stumbled upon advanced cooling technology during his efforts to treat his patients suffering from yellow fever. This mechanical process is the precursor to vapor compression. Dr. Gorrie is responsible for hypothesizing, testing, developing, and patenting the very technological framework responsible for modern refrigeration as we know it. He is arguably one of the most important pioneers of our advancing Western society. Unfortunately, Dr. Gorrie never saw a dime for his contributions to the refrigeration industry.

From steam-powered guns to banknote engravings, Jacob Perkins made a name for himself as a multi-talented, passionate inventor and physicist. While Dr. Gorrie independently developed the mechanical framework for vapor compression, Perkins discovered what was once considered magic: ammonia gas compressed into liquid results in a powerful cooling effect. This is the innovative but dangerous step toward the modern vapor compression cycle we mentioned earlier in this blog.

At the turn of the 19th century, Evans developed a keen sense and ingenuity for ideas beyond his time. This is a man who developed insightful designs and arguments for automobiles, steam engines, and automation decades before commercialization and widespread adoption. Truly an innovator among innovators.

Evans died a bitter, combative man. His poor reputation left his ideas unnoticed and underappreciated until years after his death. Well, we’re here to say thank you. Oliver Evans, you are the Vincent Van Gogh of the Industrial Revolution.

This was quite the journey into the history of refrigeration! Keep in mind this is not a comprehensive overview of modern refrigeration, rather an informed perspective on the early days of the industry we rely on, thrive in, and sometimes take for granted.

You use artificial ice every day. Take a second and think about the time, sweat, and perseverance that went into making that average ice cube into a modern marvel.

Ready to keep things cool?There's more where that came from.
Subscribe to our newsletter!
No brain freezes here –
just a weekly email from your favorite ice machine company.