and some actually are!

Ha, don’t worry, just because the company was started by his father doesn’t mean we’ll share the story the way Jeff heard it as a little tyke on his father’s knee.

As a matter of fact, Memphis Ice has more of an action-adventure type of history complete with a strategic renegade and a fiery blaze that would ignite a new chapter for this family-run business. Ok, we might be exaggerating a little bit, but we want you to keep reading! Can you blame us?

So where were we?

In 1977, Memphis Ice Machine Rental Company was born. Located right next door to Barnett Supply, Bob handled the sales, rental and service side, while Cliff focused on the big picture and operations.

A few years into the partnership, Bob hired his daughter, Betsy, to do her nails and manage accounting, payroll and taxes. She worked while also raising a 1-year-old son, Clark, at home.

Robert (Bob) Halfacre was dutifully handling sales for the biggest ice machine distributor in Memphis, Barnett Supply, in–you guessed it–1962. It wasn’t long before Bob and his boss, Cliff Barnett, decided that the future of the business was in service and rentals. They agreed that Robert was just the guy to lead the company into the future. 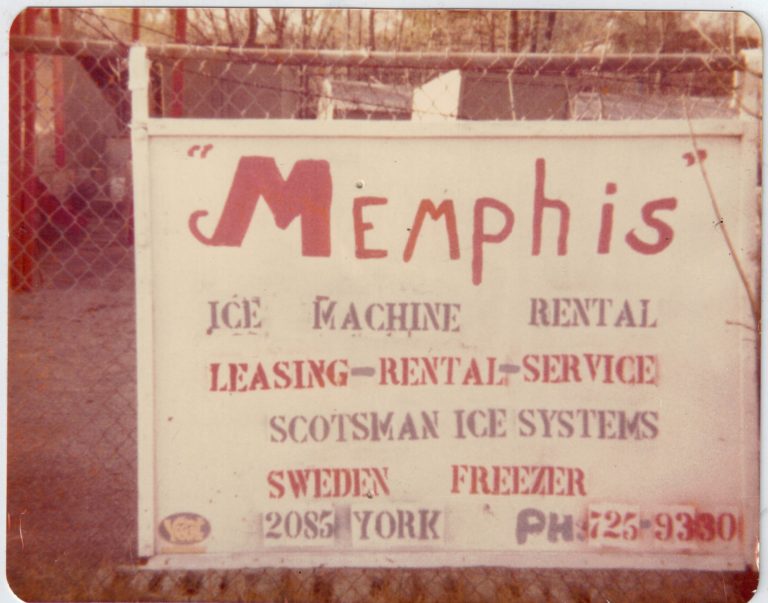 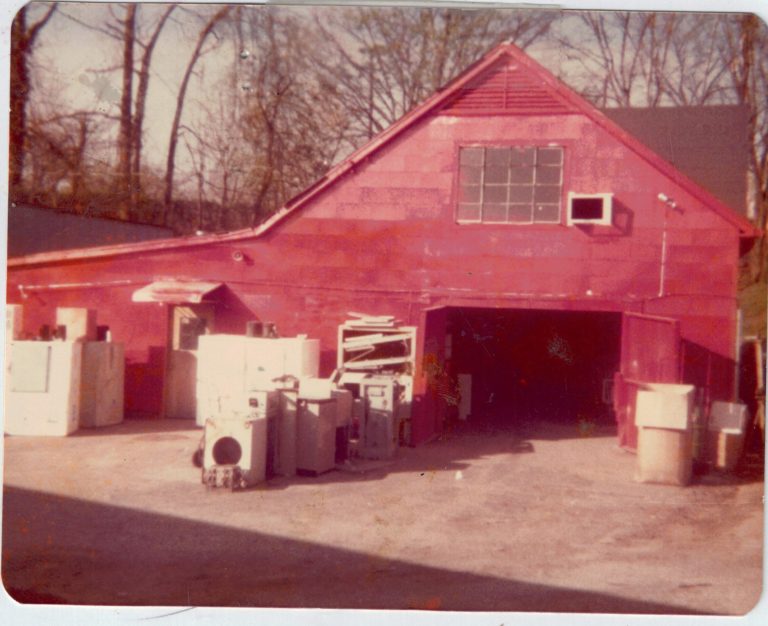 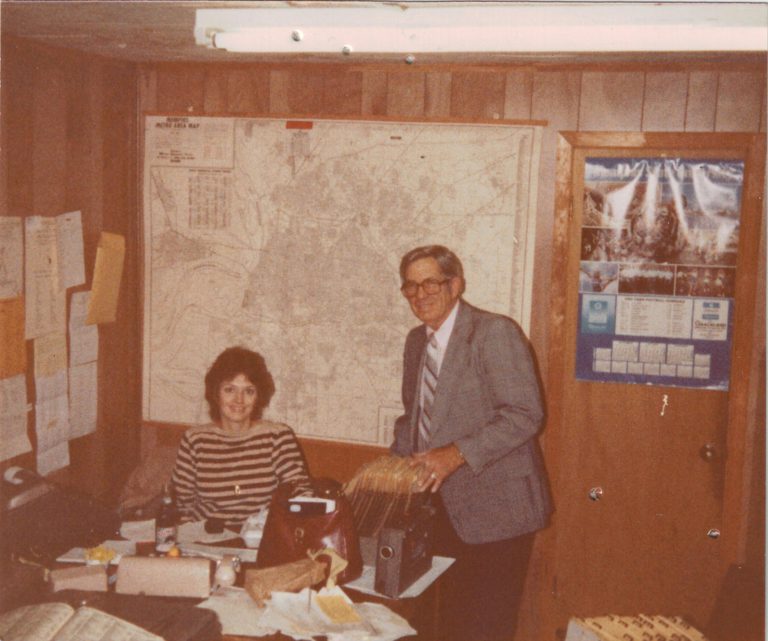 It was a perfect partnership for about seven years until Bob and Cliff agreed it was time to go their separate ways. After all, Bob was a young, energized and ambitious businessman and Cliff had plans to retire.

In addition to a new location, he made two decisions that would change everything. One decision was a partnership with Ice-O-Matic, an ice machine company that had just released its first under-counter cube ice machine. The other, a decision to hire his first-born son, Bobby. Both were a gamble, but Bob had big plans for his little company and he was the type to roll the dice.

Rolling the dice proved uncertain one year later when the unthinkable happened. As Bob watched the St. Louis Cardinals take on the Minnesota Twins in the 1987 World Series, his building on Elvis Presley Boulevard was going up in flames. The fierce and fast fire destroyed the building and took all of the inventory and equipment with it.

What seemed like a terrible stroke of luck would end up proving lucky for the man who typically knew when to hold ’em, fold ’em, walk away and run. Being the visionary that he was, Bob had already purchased a plot of land near the Memphis Airport, but he hadn’t begun developing it yet.

Insurance came through in the clutch, but to stay afloat until the brand new building on Delp Street was ready, the Halfacres worked out of a half-burned structure for nine months.

It was in the summer of 1988 that the location you all know and love opened for business. 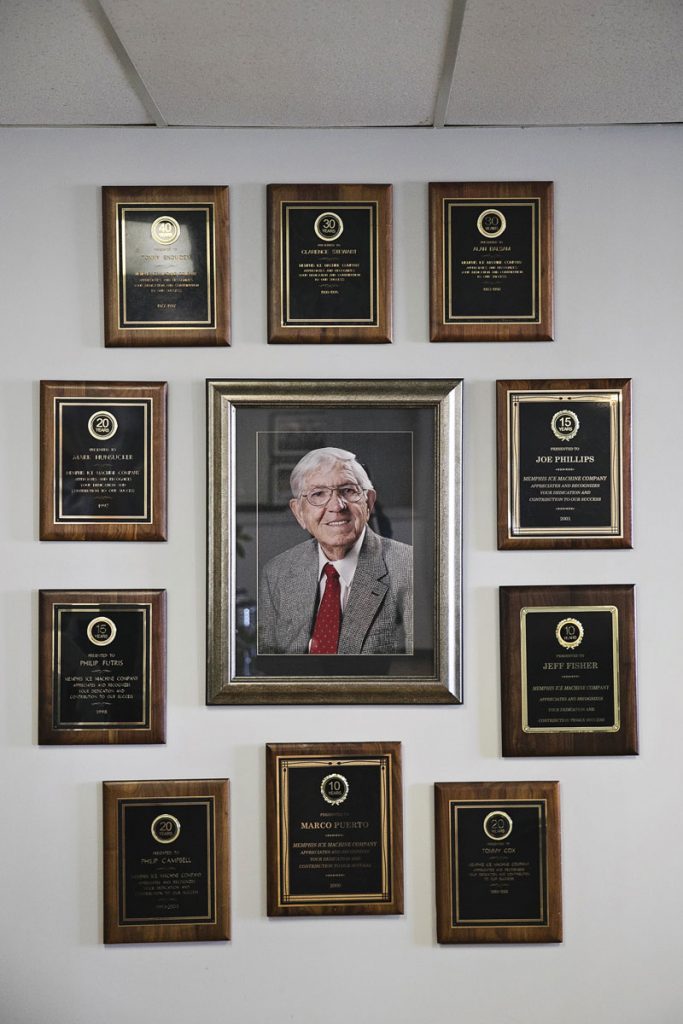 With the entire Halfacre clan on the payroll, Bob knew his company was in good hands. He enjoyed a long, well-earned retirement, which consisted of working just enough to make a mess of things before heading to the Variety Club to eat burgers and fill his rocks glass. His kids, Betsy, Jeff and Bobby, continued to run the family business–making him proud–even after his passing on April 3, 2009.

These days, Betsy is retired and still has great nails. It’s clear that Bobby was worth the gamble and Jeff’s jokes are still bad, but together with their nephew, Clark, the company continues to thrive.

Clark joined the team in May 2011 and without him, his uncles would probably still be trying to understand email and GPS. Just kidding… We’ll give them a little more credit. Clark’s IT background enabled him to incorporate new technology, systems and processes to better position Memphis Ice Machine Company for the future.

And what kind of family business would this be if we didn’t recognize the extended family that formed as a result of their hard work, commitment and loyalty?

Most of the staff has been with the company for more than a decade and some much longer than that.

Tommy Snowden, a service technician, was one of the first employees. After high school, Tommy worked as a busboy at the Buckaroo Steakhouse where he worked his way up to a cook. He then sold parts for Shelby-Skipwith, a York equipment distributor. His best friend, Rick, got a job with Memphis Ice and recommended that Bob hire Tommy. He started in July 1977 and is now considered to be one of the very best technicians in the industry.

Alan Balsam, another service technician, joined Memphis Ice the same year as Bob’s son, Jeff, in 1983. That makes them brothers in business. Alan and Jeff have known one other since kindergarten and have been friends for more than 50 years. They spent their youth playing hide and seek, swimming and excelling in general mischief. They grew up across the street and attended the same school through high school. Alan’s father was a mechanic and Robert Halfacre recognized that Alan was also mechanically gifted. He, too, is now considered to be one of the best in the business.

Other staff members with more than a decade of service include:

It would be remiss to not recognize the team members who passed away after several years of service in our Memphis Ice family.

Each of these Memphis Ice extended family members are loved and missed, and we appreciate the value they brought to this family business during their time with us.

As this blogger (who also happens to be Clark’s wife) was learning about Memphis Ice Machine Company’s history, she was treated to steak and shrimp cooked up for the team by Jeff’s wife, Tamah, the night before:

It became abundantly clear that this company takes its family just as seriously as it does its business. “Family” is not just who they are, it’s how they work.